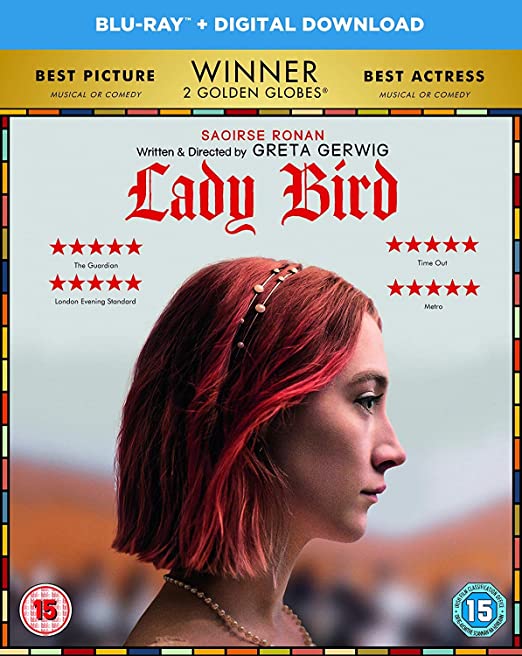 Subs: 12 launguages including most European plus Arabic and Hindi.

Note: I tried posting the whole disc but kept getting “file extention error”, so I gave up. If you want the full disc in it’s original format (.m2ts), or to burn to BDR you can find it on “the other gay torrent site”, where I posted it last night. I’m still seeding it.

Christine McPherson (Saoirse Ronan), renaming herself Lady Bird, is a senior at Immaculate Heart, a Catholic high school in Sacramento, California in the year 2002. She longs to attend a prestigious college in a “city with culture”. Her family is struggling financially, and her mother, Marion McPherson (Laurie Metcalf) tells her that Lady Bird is ungrateful for what she has. Lady Bird and her best friend Julie Steffans (Beanie Feldstein) join their school theatre program, where Lady Bird meets Danny O’Neill (Lucas Hedges: Boy Erased; Manchester by the Sea; Three Billboards outside Ebbing, Missouri), an adorable, lanky young fellow performer. She and Danny develop a romantic relationship, and she has Thanksgiving dinner with Danny’s wealthy family instead of her own, disappointing her mother. Lady Bird discovers Danny kissing a boy in a bathroom stall…. (lots of coming-of-age drama)…. Then Lady Bird meets another student, Kyle Scheible (Timothée Chalamet: Call Me by Your Name), who is in a band…. (more coming-of-age drama)…. Can Lady Bird survive life’s bumps and cracks? Will she make it to her dream sophisticated New York City college? While coming-of-age stories can often fall into their charming but conventional trappings, Lady Bird shines in that it doesn’t shy away from showing the faults of the characters it follows throughout its run time, almost to the point that you want to see even more of their journeys through life. Indie darling Greta Gerwig reveals herself to be a bold new cinematic voice with her directorial debut, excavating both the humour and pathos in: the turbulent bond between a mother and her teenage daughter; the sharing of deeply important coming-of-age moments when it’s revealed that Danny is gay; and in the deeply emotional scene when Danny comes out. Lady Bird is full of tenderness and it is scenes like this that cement its status as a future touchstone for outcast teens of this generation looking for their modern day Breakfast Club, and a few characters to identify and sympathise with. Though the character has been deceitful, Danny’s honest moment resonates thanks to Lucas Hedges' heartfelt performance. Oh, and I won’t even start on the performance of the beautiful Timothée Chalamet!