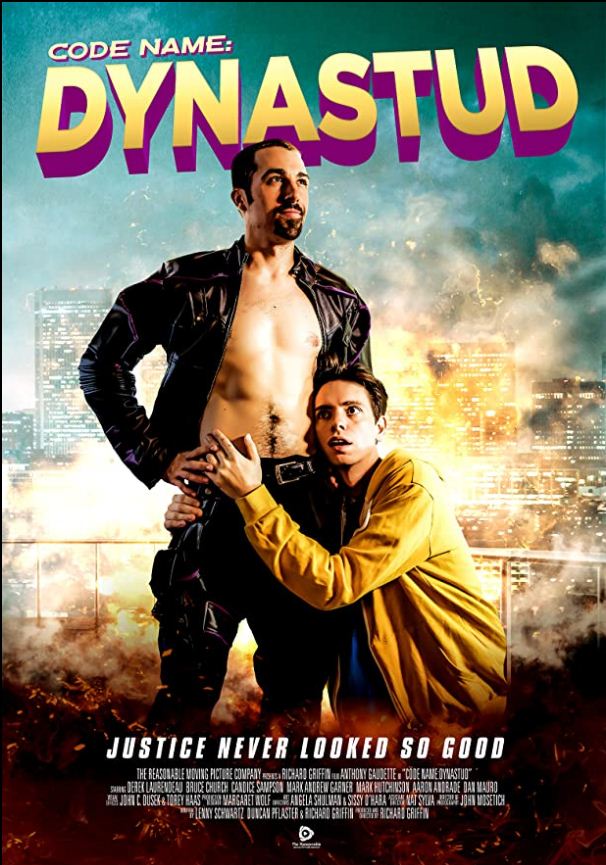 In the year 2024, homosexuality has been outlawed by an extreme right-wing government. Only one extraordinary man can stop this wave of terror and repression, a superhero for our troubled times.

I haven’t watched this yet so can’t judge it…yet! It’s either a campy, comedic masterpiece or a piece of worthless shit !

“Dynastud is what you would expect from a James Bond superhero type film with the super handsome dude hooking up with hot people and saving the world except instead of girls it is with guys. Finally a gay action, super spy, adventure, superhero movie.In a near future world where being gay is against the law we have one guy fighting for gay rights, Dynastud. Great fun but not for the easily offended but if you are a fan of Richard Griffin films then you won’t be offended. I had the privilege of being at the premiere and the crowd was raucous and laughing their collective asses off. Beautifully shot and great special effects it is a well rounded film with an amazing cast. I hope you all enjoy it as much as I did.”

“By that I mean all the 10 ratings in these reviews. Either they are coming from the actors/participants of this incredible steamy pill of horse-manure or potentially well-wishers/boyfriends of the actors. No one…and I repeat NO ONE could POSSIBLY consider this film in any way “good”. There were several full frontal scenes with very awkward actors who apparently were so desperate in their careers they not only agreed to take the roles in this film, but did full frontal…when clearly they should not have (the lead did not…which is odd since this film is supposedly all about his penis…couldn’t they have invested in a prosthetic for him?). Just awful on all fronts…not “topical”, not “funny”…just not worth watching."【G5V.NET】