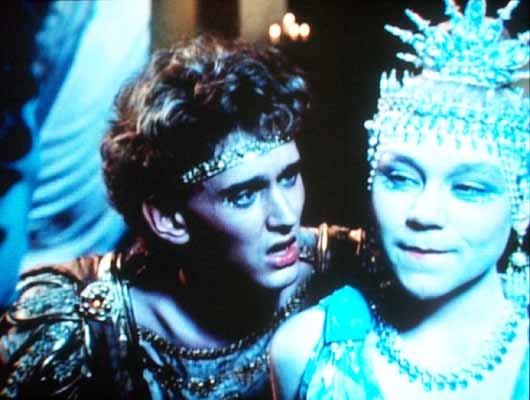 This is one-of-a-kind 1988, sort-of-indie, gay, British, film. I appreciated it a lot, and although lovers of strong acting will do the same, I suspect it will speak especially to the viewers that are into films that are camp, in an artistic and jolly, sort of way. You’re in for a wonderful surprise.

PLOT (from Wikipedia): Wilde (Nickolas Grace) and his lover Lord Alfred Douglas (Douglas Hodge) arrive late on Guy Fawkes Day in 1892 at their friend’s brothel, where they are treated to a surprise staging of Wilde’s play, public performances of which have just been banned in England by the Lord Chamberlain’s office.

In the play, all the roles are played by prostitutes or their clients, and each actor (except Grace) plays two roles, one in the brothel and the other in the play. King Herod (Stratford Johns) begs his young stepdaughter Salome (Imogen Millais-Scott) to dance for him, promising to give her anything she desires, much to the irritation of her mother, Herodias (Glenda Jackson). Salome ignores him, choosing instead to try to seduce John the Baptist, who is Herod’s prisoner.

David Doyle as A Nubian