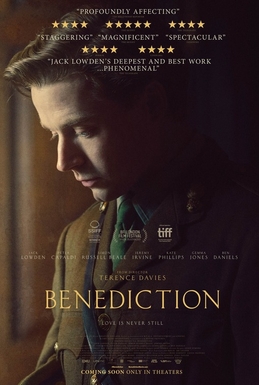 The story of gay soldier and poet Siegfried Sassoon (1886–1967), who was decorated for bravery on the Western Front, and is best remembered for his angry and compassionate poems about the First World War, which brought him public and critical acclaim. Avoiding the sentimentality and jingoism of many war poets, Sassoon wrote of the horror and brutality of trench warfare and contemptuously satirised generals, politicians, and churchmen for their incompetence and blind support of the war. And so, in the same way that Sassoon’s memories are filled and scarred with traumas and haunted memories and cherished experiences,

Davies’ Benediction reveals itself to be a film whose unconscious seems to be stamped all over by an extensive recollective history of art, literature, and cinema too. It’s a beautiful, profound, and indeed a very melancholic character study — never totally deprived of a humorous or satirical mood — through which the maverick septuagenarian portrays the never-ending horrors of the trenches, the absurdities of war, and the unfulfilled hopes and dreams for regaining lost loves and times. And if Davies’ elaborate modus operandi corresponds directly to Sassoon’s loquacious and encompassing environment, it’s only right that in the final serene scene, Davies’ subversive style and his leading character get to break away from all the suffocating boundaries, letting the most subdued feelings benevolently burst out into silent, lonely tears, deep shivers, and soul-wrenching heartache.

The now genuinely exalted WWI poet Sassoon, closeted his entire life, would eventually pass away some five decades later, just one month after the United Kingdom passed the Sexual Offences Act in July of 1967, which at last decriminalized homosexuality. He was just shy of his 81st birthday.